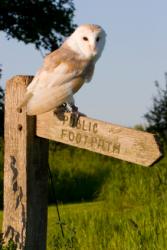 I became involved with Taxidermy 30 years ago when as a young teenager I began taking dead birds I found on the road, or my own birds that had died in one of my aviaries to a local Taxidermist.

I have always had an interest in birds from a very young age and eventually when my dad accepted this was not one of those passing childhood fads, arranged secretly, for the construction of my first aviary. Up to this time our family was well known in the area for rescuing and rehabilitating young and injured wild birds, everything from Blue Tits to Tawny Owls.

Birdkeeping also developed into birdwatching at a local reserve, Upton Warren (currently my local reserve is Ladywalk – which is a fabulous site with differing habitat attracting all sorts even Bittern in the winter), which turned into ‘twitching’ (chasing round the country to see rarities) from Portland Bill to Spurn Point over to Southport etc.

It was at my local Pet Shop where my eventual mentor sold his pieces from and my contact with Taxidermy began, and as they say the rest is history.

So I would say that I have an overall appreciation for Birds from every aspect, but I still obviously prefer to see them in their wild state. This appreciation has influenced the way I present my Taxidermy, as I endeavour to do so in a realistic and lifelike way. I have been a member of ‘The Guild of Taxidermist’s’ for a number of years and this association has undoubtedly helped to improve me as a Taxidermist, though I am still learning to this day!

Taxidermy began as a hobby and still today is not my main occupation, but increasing demand enables me to follow this passion two days a week.

I am registered with Animal Health (formerly DEFRA). All specimens that require official documentation such as an A10 (in my name) are sold with such. I undertake commission work, but also keep a large stock of both british and foreign birds, which can be ordered, all of which have either died of natural causes, been picked up from our busy roads as road deaths, or been passed onto me from Rescue/Falconry Centres.

I occasionally sell items via Ebay (my sellers name is ‘4691eel’). Please checkout my feedback. Currently I only ship to G.B, Eire, France, Spain, Germany, Netherlands, Belgium and Italy, due to complex regulations and expensive shipping costs.

There are no products in your shopping cart.